Check this out! I’m totally an over achiever! Here are a few of my favorites from the recent expansion of my Heroes & Villains series. I did these in the style of Richard Avedon (check out the American West Series specifically). “Why?” you ask, bewildered. For fun. His portraits on white can’t help but draw you in and the technique works so well! (Also, the my brother always ended up with the hero figures, so I ended up with all of the villains in the He-Man line up, which I was ok with. The villains were so much more fun.) I was actually a little worried that because of the issue of scale, that these portraits wouldn’t be as strong as I imagined in my head. I’m glad my imaginings finally live up to real life. 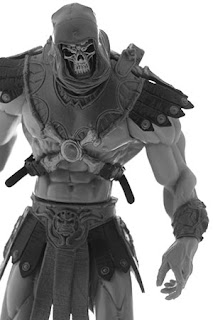 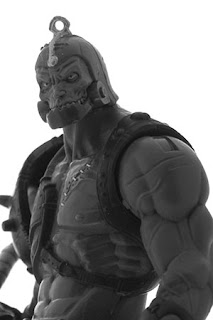 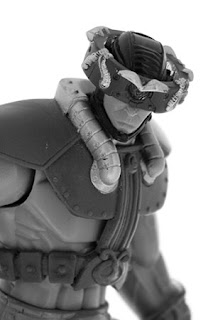 And now for the interactive part of our show! In the last post, I was asked how long each of these takes, along with time for set up and how many pictures I take. Let’s Tarantino it and begin at the end.

Sorry to be blunt, and a bit of a jerk, but I take as many pictures as necessary to get it right. For every shot, I have a mock up in my head of how I want it to look. I should right these down so I don’t fly from the seat of my pants so much, but I know what it should look like in the end. Sometimes it takes one shot, sometimes it takes 100, but I do what is necessary to make it look like what I imagine. Also, I don’t just stop when it looks like what I think it should look like. I mix things up, try new angles, move lights, flags, and scrims. It lets me explore the options and discover shots that are potentially better than what imagine (event shooting is different, and we can talk about that later if you like).

As for time for set up, that time varies between each shot as each shot requires its own set of details and carries its own set of problems. And in actuality, a lot of the time the set-up is very fluid and changes as the shoot goes on. For example, initial set up of the “Even Here” took about 5 minutes. I laid out a white sheet of foam core and dusted it with flour and put Snow Serpent on it and then framed my shot. Once that was set, the shoot itself probably took about 2 to 3 hours as I adjusted snow drifts, angles, depth of field, etc.

This leads into how long a shot takes quite nicely. Just like the number, it takes as long as necessary to get the vision in my head. I try and capture as much in frame in possible. Digital compositing, retouching, color correction are done on an as needed basis and again vary on each shot. Today’s shots took about 20 minutes in post to do all ten shots, of which I’ve only posted 3 so you don't get confused. I’ve done others where it takes 2 days or more to get one image just right.

So, just like the trip to granma’s house, “We’ll get there when we get there.” The key is knowing what you want to see when you are done. It allows you to better prepare for your shot and lets you be more creative because you’ll get to your initial idea faster, giving you more time (especially in this deadline driven world) to play around and experiment without sacrificing the goal.

So, now we know how we got here. Good thing Tarantino was around to help us out. Also, check out the fancy new label cloud. Now, with the click of a button, you can look up all posts relating to things such as pie, which I guess I have not actually posted anything on.
Posted by James at 11:07 PM 3 comments:

Told ya, WsMD (Weapon's of Mario Destruction). These guys actually weren't that bad, I mean figuring out the timing of the numerous incarnations of the Hammer Bros was way worse. Anyhoo, the shooting was actually rather intricate. Light falling on large objects is easy. Light on a small object is far more complex because of the scale: what you thought was a hard source is suddenly a soft source because of the fall off (or lack of). Regardless, I'm pretty happy with the way these turned out. It's a little different than you'd expect from the characters, but at the same time it feels very fitting. Additionally, I really love the way the light brings out emotion and character in each of the figures. Along a similar note, you should check out the Iron Giant. I really enjoyed it. Also, it relates to today's post. I swear. Relatively often, but I'm trying to cut back. 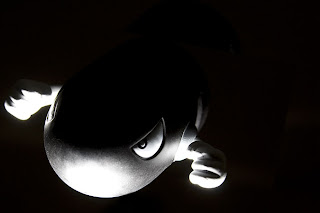 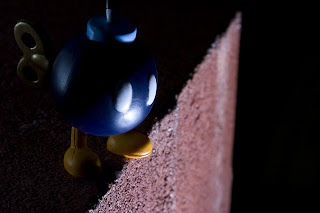 You may recall that I am some sort of ninja. With that in mind, I ended up at an Obama rally today at the Colorado School of Mines. I actually was volunteering (I ended up doing line management, telling people where to go, making sure people had tickets, and such) and happened to only have my trusty point and click with me. Still, I got some ok photos of the Barack-Star himself.

Does it get any better than this?! Kung-Fu Panda! 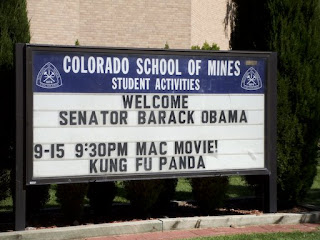 Notice they did not have the score board lit up. 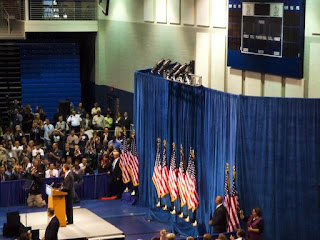 So I had a friend comment on how he was glad to see this particular shot, not because it was by any means good (it's not, by the way) but because it did something he hadn't seen in all of the other media from the event. This one particular image showed a sense of place, something which I feel is very important in any event documentary coverage. This type of image becomes much more important for the "locals" than anybody else because the Senator at a podium in front of a blue curtain could have been taken anywhere. A sense of place grounds us and reminds us that this is what is happening. I'm glad I could be of service.

Not content with simply accepting the same photos everyone else was taking, I took one for myself. For a quick hit, I’m happy with it. It focuses on what I enjoy doing the most (next to photography), volunteering (though volunteering to do photography is pretty much like a massive sugar rush). I do wish the zip-up and safety pin were a little more defined, and maybe I’ll try reshooting it if I find the time. And I haven’t forgotten, photos of W’sMD to come (WMD’s is grammatically incorrect as "Destructions" doesn’t make much sense). 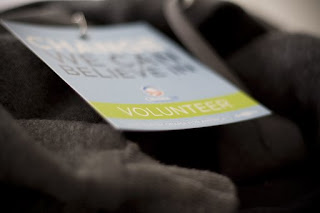 And here you thought I wouldn’t make it, when in fact I thought I wouldn’t make it. This particular image has been in progress for well over three months. Why? Mostly because, as it turns out, photography for fun is not the only thing I do, as well as the whole “I have to build an office building?!” Who knew that you could get tiny marble flooring? Anywho, feast your eyes upon “Another day,” as in “Another day at the office.” War is business and that is a sad fact. We were warned about the military-industrial complex by President Eisenhower, and unfortunately it was unavoidable. I mean, sure we probably could have limited it and its influence, but I doubt there’s really anything anybody could do about it. Well, here is yet another post that is quite the downer. Unfortunately, it looks like the next toy shot will yet again deal with those rascally weapons of war. Until next time, true believers! 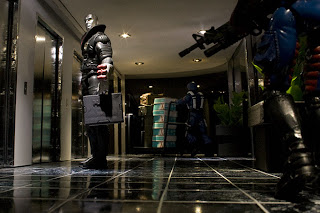