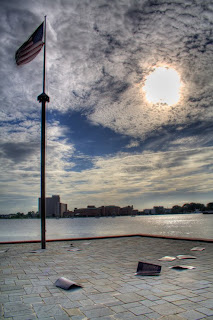 At the Town Point Park on the Elizabeth River, letters cast in bronze seem to flutter across the paving stones. These are not ordinary letters, they are from men and women and all seem to say the same thing: war is not glorious, but at times it is a necessity. These are not simply letters of soldiers ever present beneath Old Glory, but these are the words of fathers, brothers, sons and more and it is a fitting tribute to those that have served and continue to serve so we don't have to.
Posted by James at 7:41 PM No comments:

Days that Shape Our Lives

To say that this day has not shaped the course of my life would be a lie, but as a generality it usually passes without incident. As time passes, the day itself has become less important, “The Day You Forgot About Me”[1] as it were and I’ve long accepted that for this day to hold any weight, it is I that must shape it.

There’s the rub, as they say. With little exception, you shape the day that shapes you and this past year has not been an exception to the rule. When last we had a conversation of this sort, I spoke of filling your lungs with fear and exhaling [2], of taking the risk and knowing that it is worth it. [3] and the moments that followed were without doubt events that reshaped the path I walk. First there was the goodbyes to the familiar, the safe and heading out to the other side of the world. Those I met within those all to brief moments, passionate about the lives they live, helped me more than they can know, if not the path, then at least the direction I need to go. If anything, I am proud that I was there to witness their lives, as their moments own began. Second, perhaps the more difficult, was leaving them and returning to the world I once knew, now different.

And here I am again, the path remains less solid, and though the fear remains, it weighs less heavily upon my shoulders as it once did. They say "Life gets in the way of living" [4], so we'd better get busy living or get busy dying [5].

So there we have it, the future remains uncertain, and many more days lie ahead for our shaping.


Notes:
Todays title has been brought to you by Me Vs Hero (I prefer the acoustic version myself)
[1] Cavashawn, just so you know
[2] It’s my Turn to Fly by the Urge from the totally ace film Titan AE
[3] “Decide whether or not the goal is worth the risks involved. If it is, stop worrying.” - Amelia Earhart. What a great lady.
[4] They don't say that. I do. That bad boys all me.
[5] Andy from the epic Shawshank Redemption
[6] Smile a little while you're at it
Posted by James at 6:11 AM No comments:

To borrow from the Denver Film Festival, it's always something when you see something with new eyes. 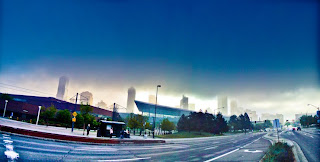 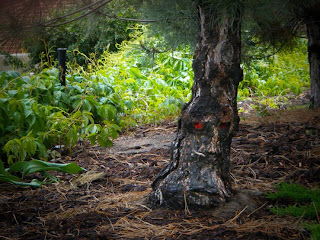 Seems like the trees are asking the same thing...

I've said it before, but it's all about seeing things and this guy was staring back at me. I just added a little color to his eyes.
Posted by James at 8:18 PM No comments: