Get Your Dynamic On 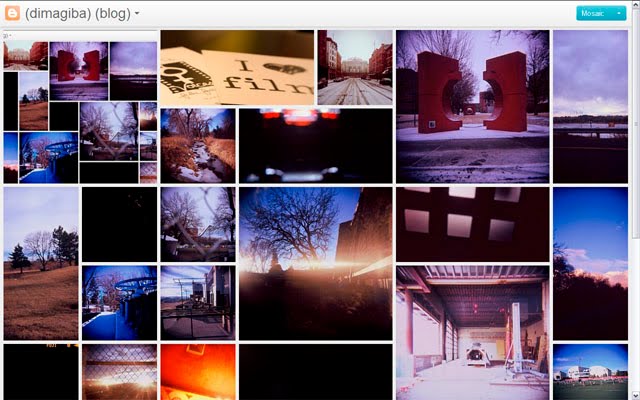 One of the things that I love about photography is its persistence of multiple perspectives (Yes I lament the fact that everyone, their mother, and their canine companion has a camera at an event, but no matter what, no image is ever the same).

Our good friends at Blogger, who if you don't know freely host this blog have, made some very interesting ways to view blogs. I say few because only two of the five really stand out as being effective for my blog. For your viewing pleasure I present the following:

I like this one the best, though navigation and order is a little unruly. Luckily, we've managed to avoid problems in nesting. I didn't even have to do anything, it's like Blogger knew the inherent problems of a smaller and smaller post.

Mostly the same as Mosaic, with just a more uniform top page. Plus it opens the post to the side instead of down.

The rest I am just not that fond of. You can surmise why I don't like SnapShot, but the other two just don't gel with my particular blog, one that is heaviest with photos.

So what do you think? Which is your favorite?
Posted by James at 8:07 AM No comments:

Lets face facts. I am a fan of women and I am a fan of film. So it was a wonderful opportunity to work with the Women+Film Voices Film Festival a few weeks ago. If you weren't able to attend, you really need to plan on attending next year. Women+Film celebrates the art and cinematic contributions of women filmmakers from around the world in all formats, content, and genre. An early partner with the Denver Film Society and the Denver Film Festival it has now grown into its own festival. And what a festival it is. 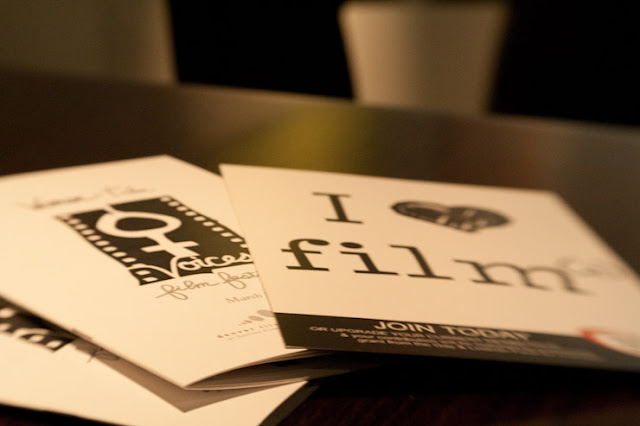 You know your festival is a hit when it is, as S.I. puts it, "S.R.O." or "Standing Room Only." The Denver Film Center Colfax hosted two sold out screenings (with many more still hoping to get tickets) of the film Soul Surfer, based on the inspirational story of Bethany Hamilton, directed by the extremely talented Sean McNamara who was on hand to answer questions. 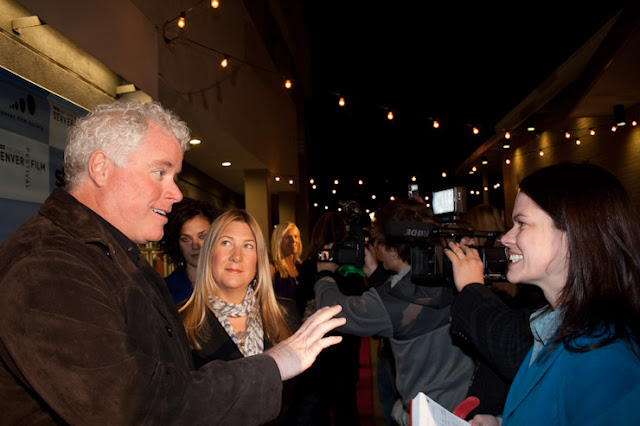 In fact, Bethany Hamilton herself showed up with her onscreen doppelganger, the talented AnnaSophia Robb. It's like "AnnaSophia Robb! No Way!" Certainly a rising star if I ever saw one, I mean she did receive the Denver Film Festival's Rising Star Award in 2009. 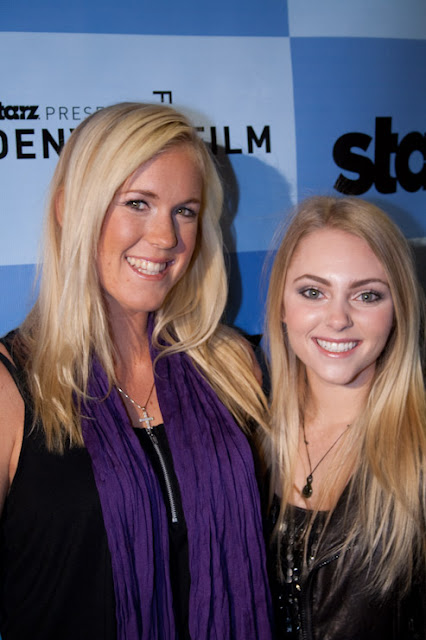 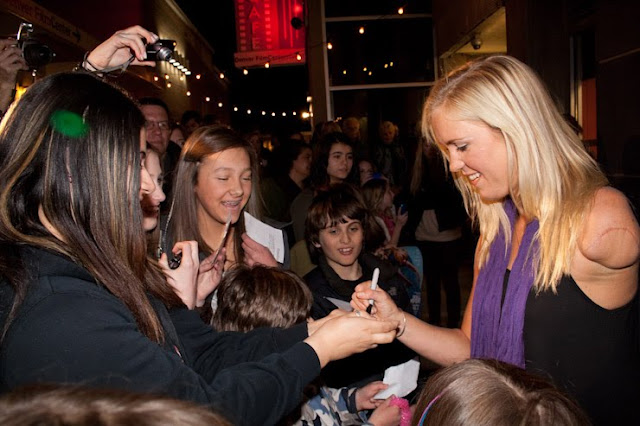 Of course, voices was not just about amazing films such as Jane Eyre, Miss Reception, A Powerful Noise, Queen to Play and many more, but it was about discussion and education. Several Salons were held, covering topics from social change to feminism and the art movement. 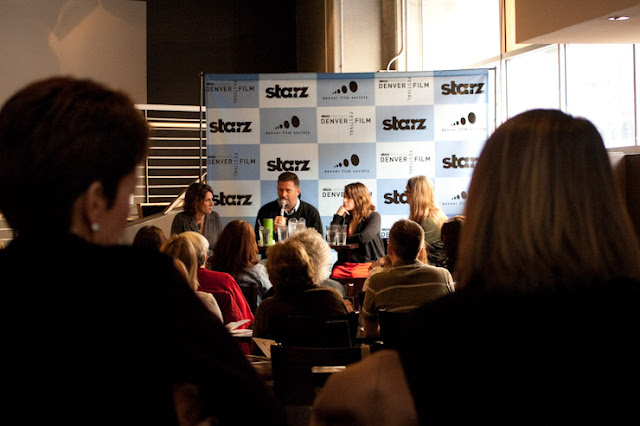 So mark your calendars and get ready for next year's Women+Film Voices Film Festival to be held 6th March to 11th March 2012.

And of course to perhaps christen the Denver Film Center Colfax, which I still can't fathom why you haven't checked it out yet, here is a shadow cast during the Voices Film Festival. 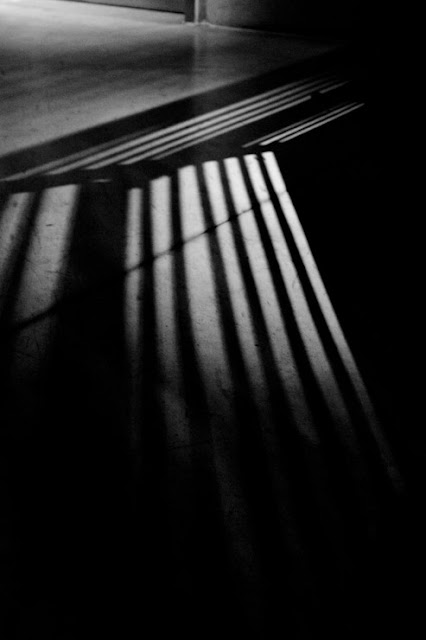 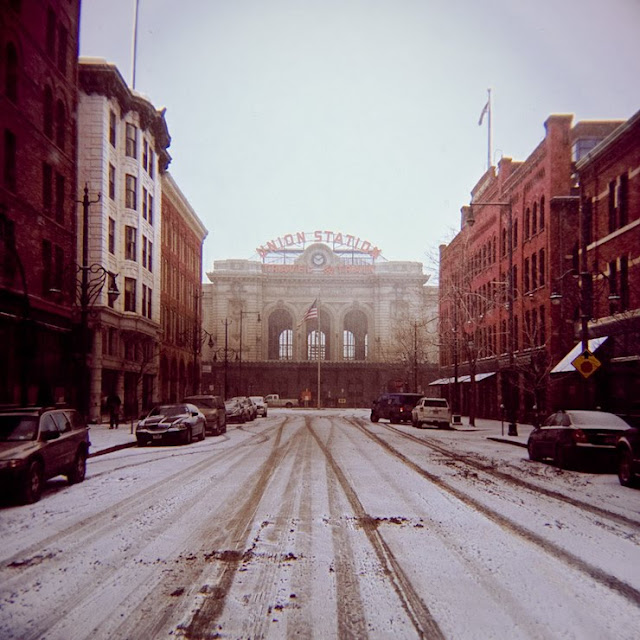 Holga Bonus! For those of you that are, for lack of a better word, "savvy," January has thirty one days. A roll of 120 film, shot square, has twelve frames. That leaves me with five extra frames. This is the last frame on the last roll. It's also the only one that I've done some retouching and post work on. Why? Because I wanted to, because it wasn't a part of the Holga Days, and because I felt that it would be made that much better by a little touch up (it was already awesome to begin with, and now it is all kinds of Epic).

Now, in ages past, we would have taken a step back and looked at exactly what worked and what didn't. I'm not necessarily going to do that this time. Holga Days wasn't about getting one great shot out of the whole month. It was an exercise in shooting, in taking the time to consider the shot before I pressed the shutter. And even though I did that (and have been doing that), we already know that some did not even come out. It happens. Holga is not a precise medium and the day it becomes one, I don't think it would be quite as magical or effective. So, those that worked, those that utilized a combination of film, setting, exposure, are there beside the ones that didn't. They all provided something of value, as they all accomplished what this year's project was supposed to. And that's all I have to say on the matter.
Posted by James at 11:20 PM No comments: 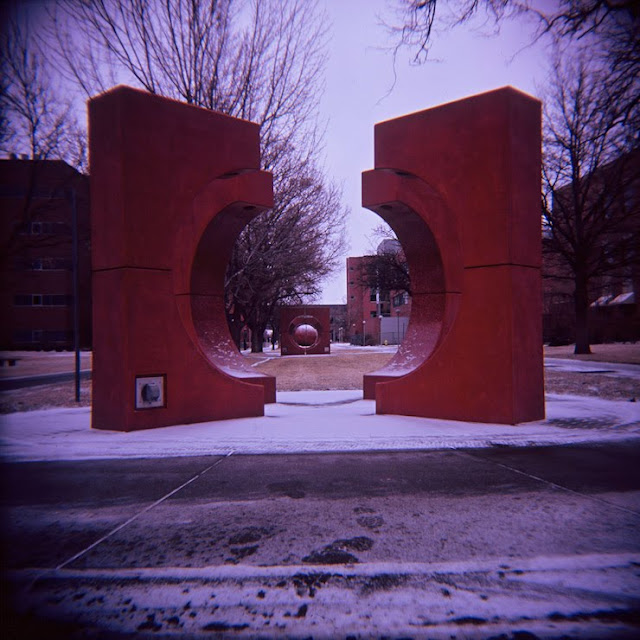 And as it has been said before, we have reached a terminus.
Posted by James at 1:47 AM No comments: 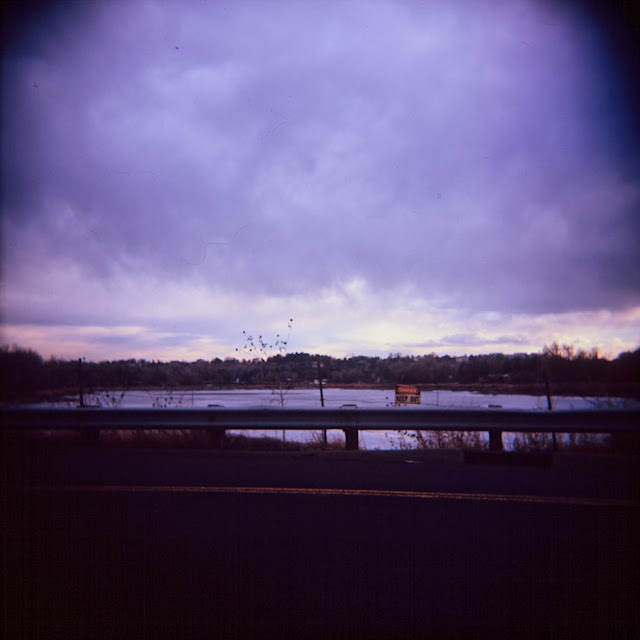 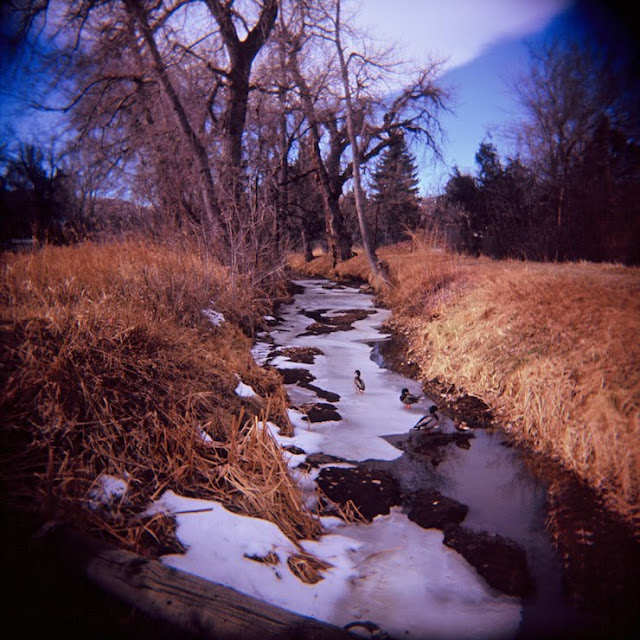 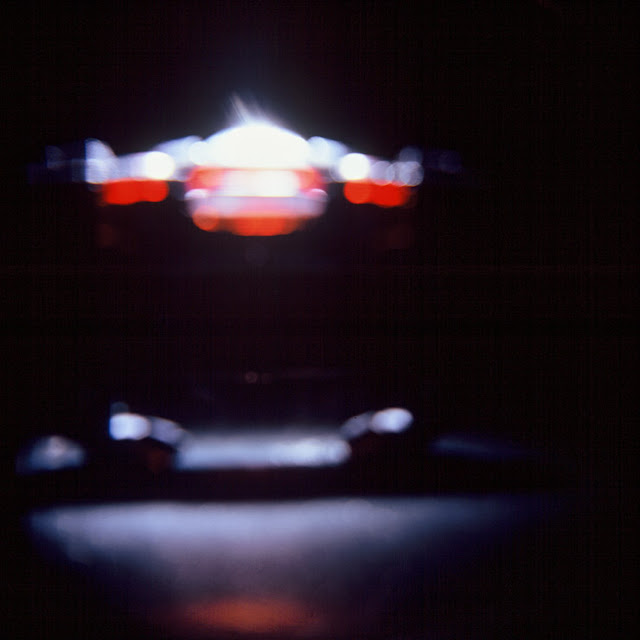 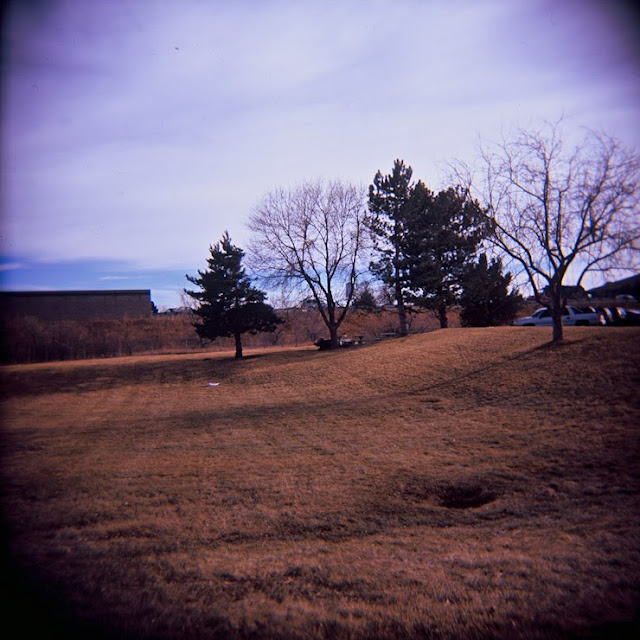 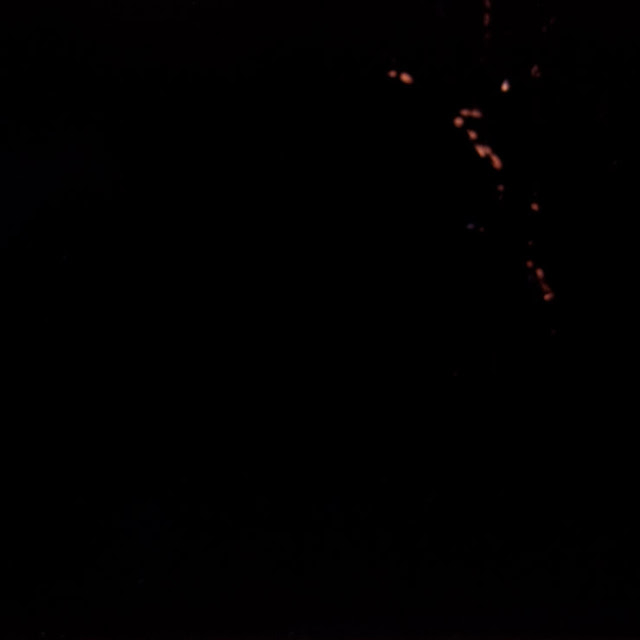 Working with a flash on a Holga is all kinds of ridiculous, but it is effective for compensating for the holga's limitations. Unless of course you happen to be bad at aiming your off camera flash. Then you get stuff like this.
Posted by James at 7:19 AM No comments: 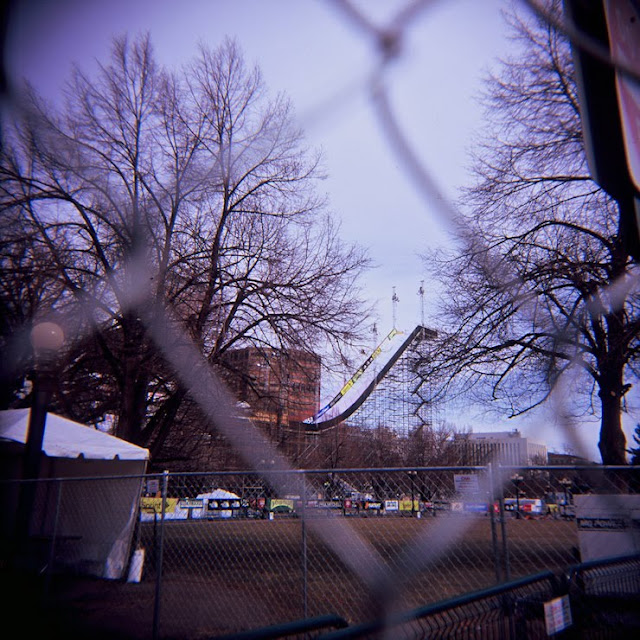 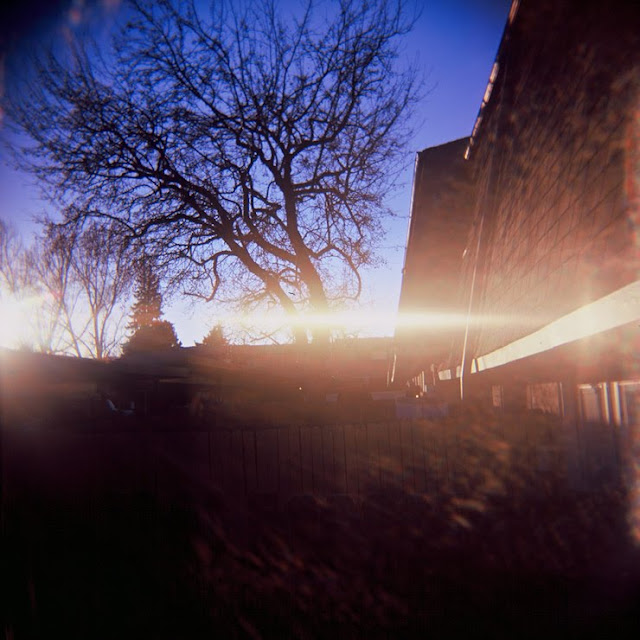 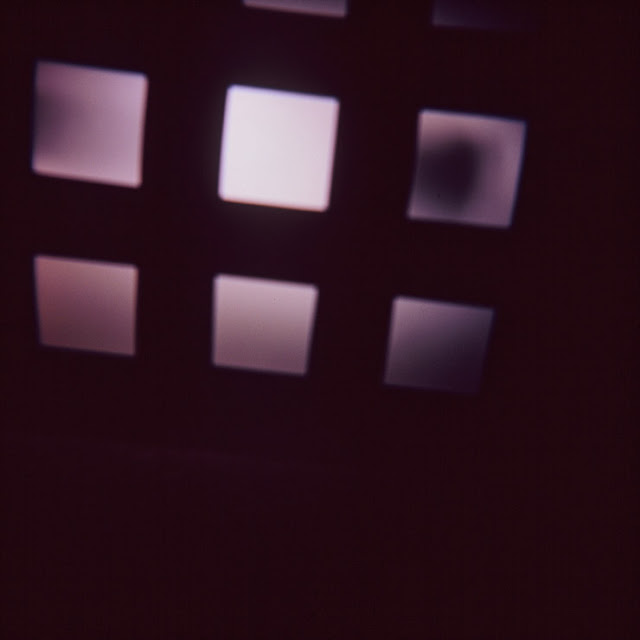 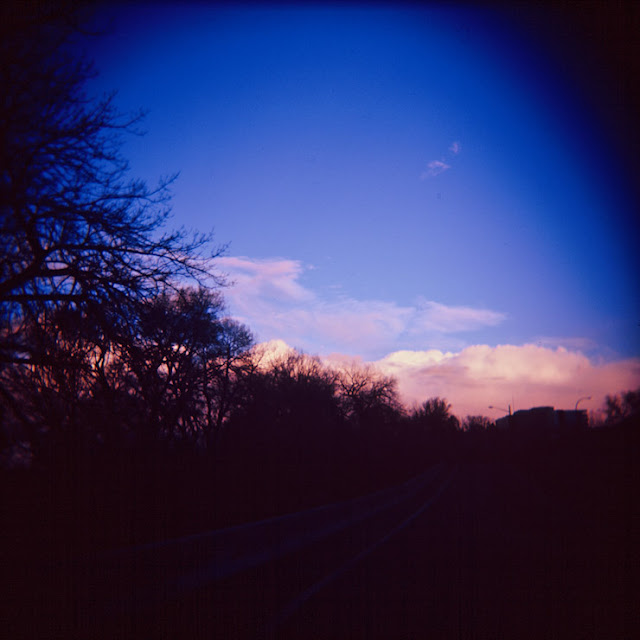 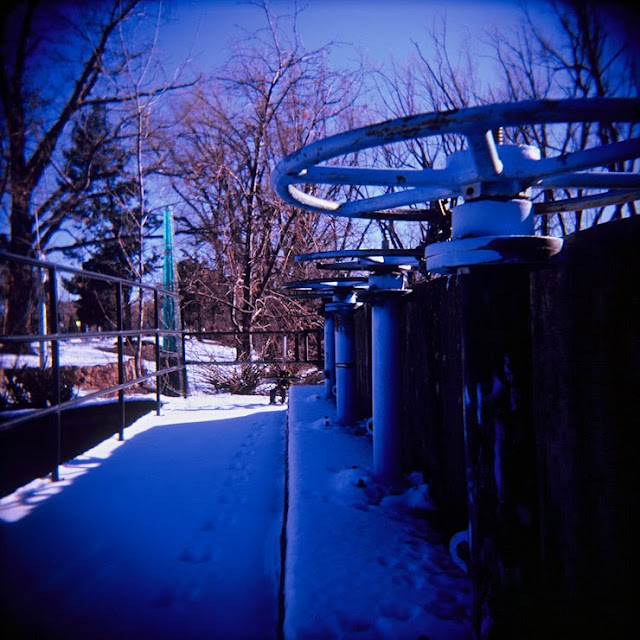 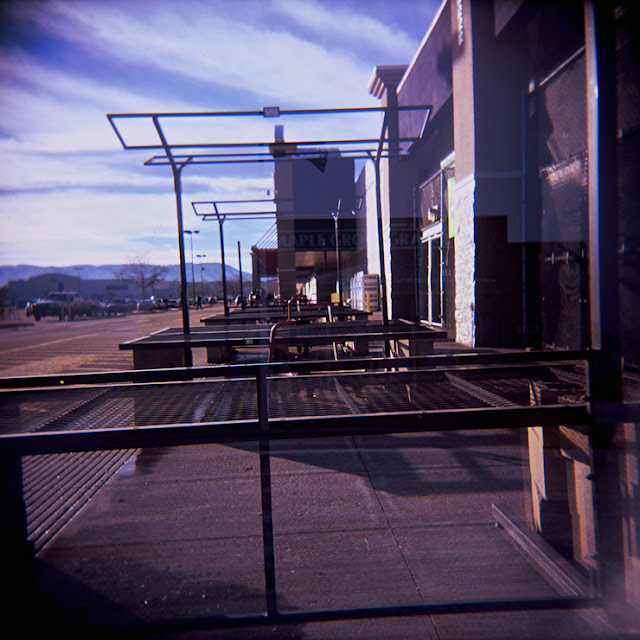 Yep, Forgot to advance the roll. You have to look closely, but you can see the Maple Grove Grange building, which was the official Nineteenth January.
Posted by James at 7:39 AM No comments: 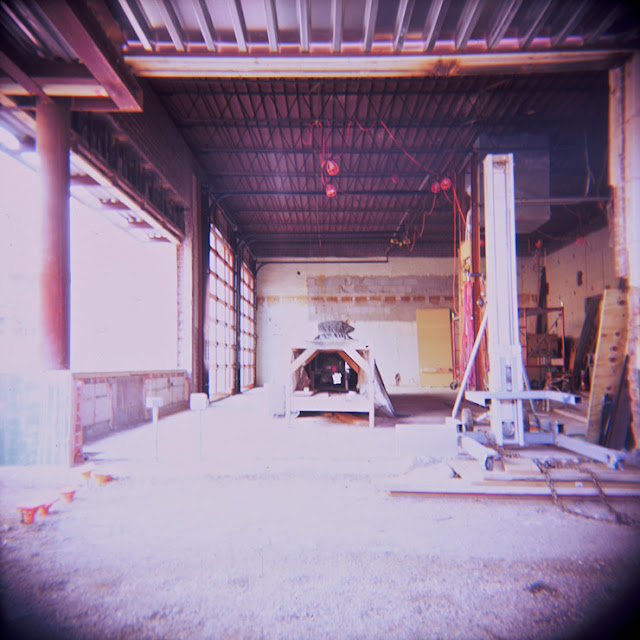 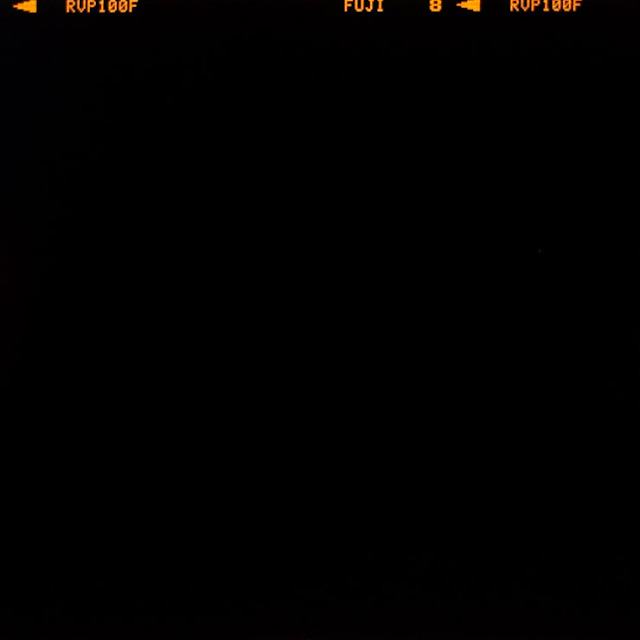 So I left the frame indicator on this one just so you know it is an actual frame off of the roll. The tricky thing with any camera, not just Holga, is that for the most part it has a fixed aperture and shutter speed for any individual shot. The human eye on the other hand reacts dynamically allowing you to take in a greater range of light (some say the equivalent of 24 f-stops. To keep from getting too lecture-y, think of the human eye as being able to distinguish shadows within shadows and still see the texture of the surface underneath them. Yeah, that may not make too much sense, but in the end the human eye is more sensitive than your camera) and sometimes I forget that.
Posted by James at 7:31 AM No comments: 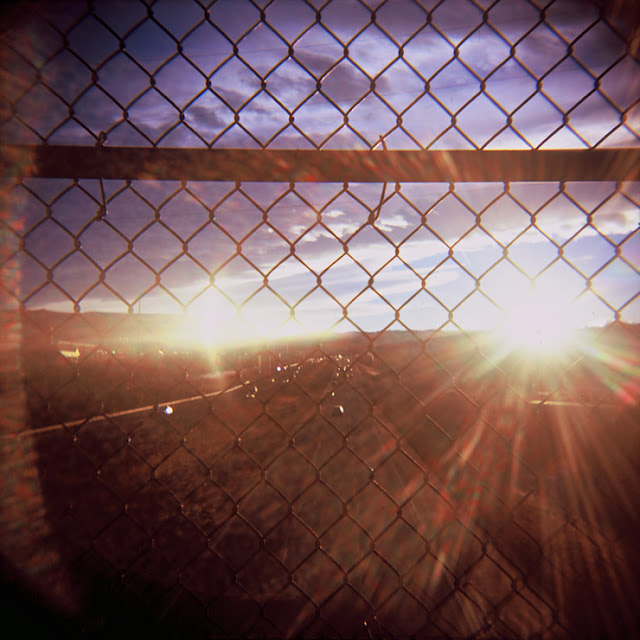 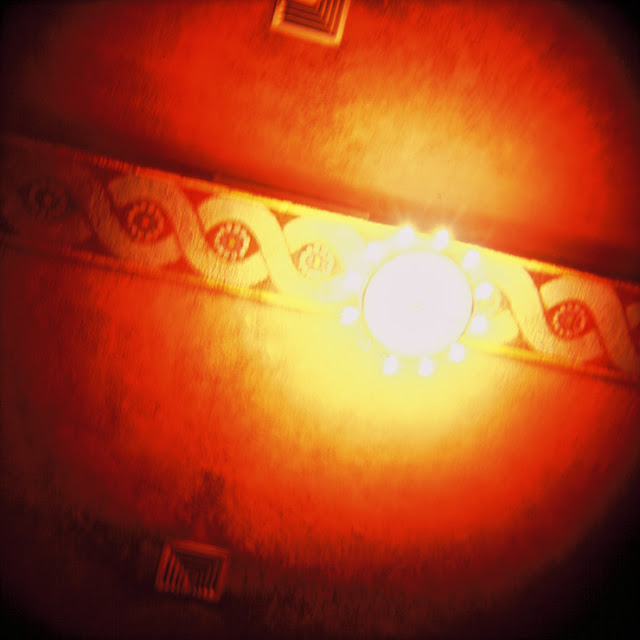 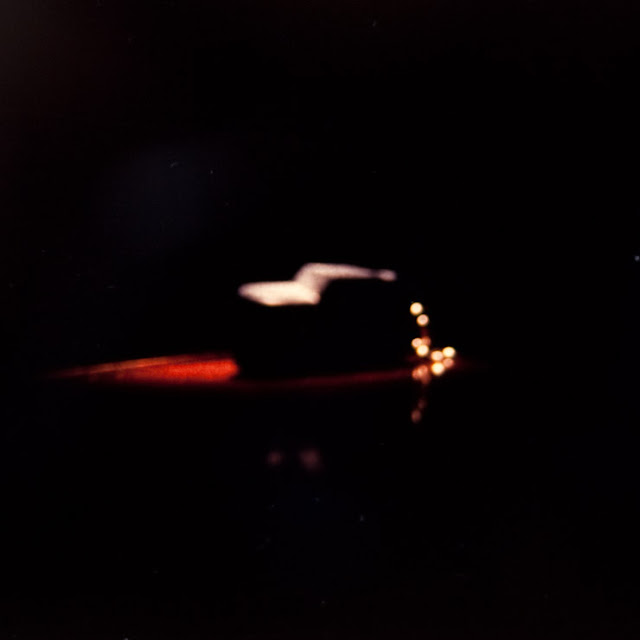 Guess, mostly because it's super amusing to me the concept of this shot.
Posted by James at 7:17 AM No comments: