Freakish playing card imps. What will they think of next? 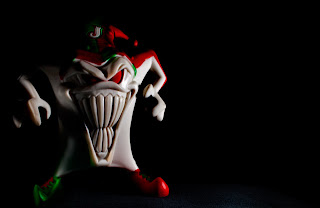 (In case you have no clue regarding the title of this post, this is from the Legend of the Dark Knight line done by Kenner a while back. Turns out I don't get rid of anything.)
Posted by James at 7:47 PM No comments:

Wouldn’t that be nice? A life where everything just fell into place and you didn’t have to worry. Would that really be worth it though? This past year has been quite frightening, and looking back on it, that’s a good thing. During it, not so much, but looking back in retrospect, sure it all works out for the best.

I shot few events this past year, but that’s not to say the year was uneventful. I was able to get reacquainted with an old event that I had lost enthusiasm for (the Albuquerque International Balloon Fiesta) as well as had a wonderful time at an event that has become near and dear to me and that I will always try to support (the Denver Film Festival).

Those weren’t really the frightening bits though. Those were the safe bits. That’s one of the things that I am still learning to face: stepping away from what is “safe” and attempting something that I thought I wouldn’t have the strength to do. It seems this past year held quite a bit of that, from leaving the safety and comfort of a home called Denver and moving to New Mexico (where I feel much more like a fish out of water than when I moved to Denver), to quitting a job that was supposed to be temporary but instead became a family (thanks for the jacket by the way, I love it).

In my random ramblings about pirates, I mentioned that Columbus took about four months to cross the Atlantic. During that time, I imagine a time where time itself felt removed, where the world seemed slow, and the only purpose was to make it to tomorrow in the hopes that land would appear on the horizon. And when land was spotted, what an adventure to be had! But more than that, again there was the fear. Fear about a new land, a new set of challenges and another step beyond what is safe. I mean, for four months, the ship had become home, and now what was to become of them?

Now, I’m not a big history buff, but I feel like one of those sailors. I’ve done something similar; said farewell to my friends and family in Denver, moved to New Mexico to build a new home, and then what? In four months, there will something new to challenge, to experience, and ultimately to be afraid of.

But that’s the way it will always be, won’t it? This year just feels like all of it is happening at once, I think partially because of what’s happening with the world. You can let the fear of the unknown stop you, or you can overcome it. You don’t have to do it in one fell swoop. Take it in steps, go as far as you are comfortable, take a break, then go one step further. Hold onto something familiar to give you the strength to continue, be it family, friends, or even hobbies or music (or a ratty blanket you’ve had since you were small). In the end, life will always be frightening, so just take it in stride and keep putting one foot in front of the other.

(Wow, you think I could have put in any more idioms? I almost tried to work in “cowboy up” so that I could work in a “cowboy versus pirates” comment. Maybe next year.)
Posted by James at 6:43 AM No comments: 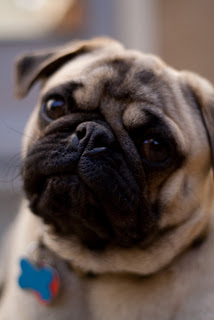 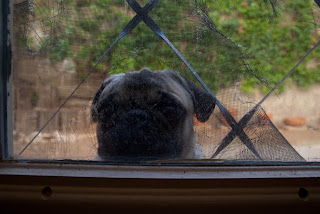 In case no one told you, animal photography contains its own set of challenges.
Posted by James at 8:35 PM No comments:

Labels: A Day Out, dogs

But this was pretty cool nonetheless. And yes, I had pirate ships at the airport and no, no one seem phased by my penchant for oddity. 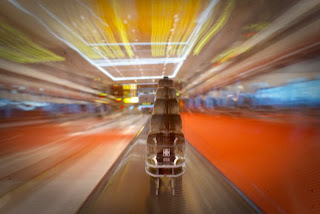 And, just because a friend of mine mentioned it here on his blog (you should check it out, lots of good stuff), yes, this is blurry. Is it art? Who knows. Unlike the example Andrew shows, my image has intent in its use of blur, which can clearly be identified. I'm not so sure about the example, but I haven't spoken with the photographer so the intent could just be very subtle. I think that it looks like was taken from a car as it passed the tower, but that's me.

I think that we are far beyond the technical limitations faced by such men as Cartier-Bresson and Steichen (who by the way, manage to take sharp images as well as hauntingly beautiful soft images) that a soft image with clear camera shake needs to be evaluated much more heavily before calling it art. Still, clearly the image has generated discussion which art should do, so perhaps it is art. But if that is the case, then I wonder if our standards have fallen along the way. Who am I to say? I generally take pictures of things molded out of plastic and intended for children of all ages.
Posted by James at 10:00 AM No comments: